I play concertina, mostly for English Country Dance.  In its heyday (1650-1850), if you lived in the country, you saw people a) at church or b) at a dance or c) your immediate neighbors when you bumped into them.  No telephone, no cars and travel was over rough dirt roads by horse or carriage.

So dances were a big deal.

English Country Dance was the way you met people,  got together, showed off, gossiped, flirted with your friends. The dance was designed to do all that, and you danced with everyone, men and women.  If you've seen any of the Jane Austen movies, you'll have seen the dance, for it was social life then...and Ms. Austen loved it and made it an integral part of her novels

And it's still danced with grace and joy in the dance, witness this image of an English Country Dance ball...

I love the dance and its music, with wonderful period melodies in a protoclassical style.  Each dance has its own tune and there are thousands of them, many of them using popular songs of the day.  Much of what we listen to as baroque classical music was either dance music or based on dance music: this music.

Here's a video of a dance from a movie of Pride and Prejudice. Watch Elizabeth dish Darcy handily all the while they are dancing...and listen to the beguiling music they're dancing to with such grace and flowing motion....

It is still danced and contemporary callers are always adding to the repetoire.
Here is a video of a good present day dance, English Country Dance Atlanta - Fandango - Saturday Night Three Dances
...again, listen to the beguiling music they're dancing to.  The music lends grace to the dance. and the dancers grace the music they dance to.

Finally, a complicated and dizzingly synchronized contemporary dance with contemporary music,  The Chocolate Equation, with Heys and Stars rippling down three couple sets

If Covid ever allows dance again and you'd like to try the dance in lower NY state, there are ECD dance series in:

There are also dances nationwide.  The flagship organization is CDSS, The Country Dance and Song Society. Here's their map of dances which you can zoom in on.  Look for the English checkmark

Playing for the Dance

Something about what is involved is explained here 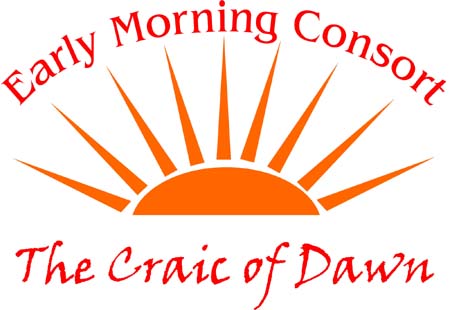 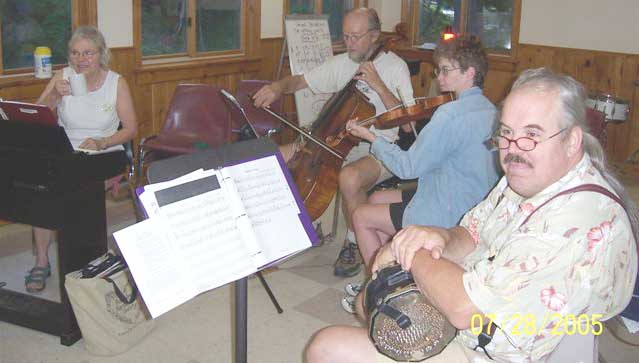 I used to get together in the morning before breakfast at Ashokan (a weeklong summer music and dance camp in upstate NY, more here) and play with my friends of the Fine Companions ECD band from Binghamton, NY; they are, here left to right, Charlene Thompson (piano) and Lee (violin) and Julian (cello) Shepherd.

The concertina is pretty obvious in the music; if it isn't string or piano, it's a tina.  Also, I'm playing two unusual Lachnal Edeophone concertinas: a baritone (in my lap in the picture above) which transposes down an octave and a soprano or piccolo that transposes up an octave.  I'm using the soprano a lot here, playing a descant backup to the cello in the high register.

Adlai and I, Bagatelle


Adlai Waksman is a gleeful wizard on the keyboard...piano, organ, accordion, like that.  One of the realities of being a musician is that partnership is so rare...the people you play with need to be very close to your level of musicianship, very close to your particular musical imagination/style and able to click with you as a person (while it may seem puzzling to the outside world, musicians know why all those great bands break up....the wonder really is that they stay together at all or for very long!).  It is my great good fortune to have a good bit of that with Adlai and to make music with him.

Every once in a while, Adlai (who, alas, lives far to the south in Philly) is in the neighborhood and gives me a call...just a few hours or a few days in advance...and we get together for a few hours or an evening in the Bard College Chapel, a wonderfully resonant space..  We'll just pick tunes from the wonderful ECD canon at random and play them.  No planning, no practice, no retakes...we just play the tune a number of times through, alternating on melody and counter-melody backup until it seems done....and then go on to another; we don't redo .  I roll a recording and, as the years go by, the percentage of pretty good takes has risen.

The organ had a stuck note, so Adlai took the big beautiful Steinway concert grand.  These tunes are for contenporary ECD compositions, they are mostly modern and all but two are waltzes.  Waltzes, of course, are slower and have more "room"...so you more readily get them right and there's more room and time for harmonization....  We had about 3-4 hours together and both of us were tired before we began, but we did well enough. The title refers to my sense of ECD music...that it should seem so easily done as to appear effortless, to seem trifling, a mere bagatelle...

If you'd like a CD of this, write me at this email address. We've recorded A Few Trifles More since then, and are working on Just Another Whimsy.

Here we are playing Peter Barnes' The Dark of Night.

During the summer of '01, the organ in the lovely stone chapel at Bard College was being restored.  I practice there daily; as with singing in the shower, there are lovely reverberations that make my music sound better than it is…besides, it's such a beautiful and peaceful space.


One of the fellows working on the restoration, Adlai Waksman,an ECD enthusiast from Philadelphia, asked if he might accompany me on the organ.  I was delighted, then stunned by the lovely running accompaniment he produced with the three keyboards of the organ.This happened during a brief opportunity…we only played together three times….I finally decided I wanted a recording, which only barely happened on the third time.  Earlier the same day we had played the second time and managed to get together again at 10PM that night.  I was wasted, there was only one copy of Barnes, this was the first time Adlai had seen many of these tunes and I had to play standing up,reading the music over Adlai's shoulder, all of which leads up to this: This recording was very much a spur-of-the-moment happenstance with imperfections (and recorded with a Sony video camera!)….but the overall effect when things clicked was so gorgeous that I thought others would like to hear it.


To give you an idea of what this music looks like, here is the sheet music for the A secton of Jack's Maggot.  For what it's worth, in the 1700's a whimsical person was said to be maggot brained, thus a maggot titled dance was a whimsical, spirited and often fast one.

To learn about playing this music, see here...

And a side issue....Religious self-righteousness and intolerance is much in the air these days....but why is Stewart bringing this up on a page about an archaic dance form?  Because, in its day, this dance was thought of as ungodly by Puritans and even by the Roundheads of the Glorious Revolution....witness this Puritan diatribe from 1633

Peter Barnes has published the definitive sheet music book of the core canon of ECD music,
The Barnes Book of English Country Dance Tunes.
There's a second volume and soon to be a third.

It is available from him (click here and select Books & CDs)

The Country Dance And Song Society
which has a lot of resources for ECD including their store
https://cdss.force.com/commons/s/store

much to my surprise, EFDSS, in England, doesn't seem to carry it.

Another traditional English dance form: Morris Dance...... Um, how to describe it?  It's a ritual dance that's been done in the English countryside usually in the spring, with villages all having their own particular dances;  It's history stretches back at least to the 1500s....and it's done because it's always been done.  It's a vigorous dance form with often with what I might describe as ritualized quarterstaff combat.  Here's one from the 1800's to the music of The Postman's Knock.

Here's a picture of me with a revived and but somewhat bobtailed (short more than a few dancers) Mianus Morris side after dancing out at the Aquafest, celebrateing the old Croton Aqueduct in Westchester county north of NYC.  On the left is Rod Santos, then me, then Jon Lipincott (the chief instigator) and Jeanne Velonis ont the right

And there's more...the English, too, have their sword dance.  Here's a rousing performance by a smashing bunch of women.

Of course, everything is upside down with Covid; check these websites to find out what is available and happening....

My photographs of both are available here...

I made some videos of Northern Week and have posted them on You Tube:

Back before eBay, maybe around 1990, I had taken up the English Concertina.  I started with a Lachenal student model, but soon was looking for a good one, a Wheatstone.  Before eBay and the internet, they were terribly hard to find.  Someone mentioned then that the Salvationists had them, often no longer played, but left behind by aunts, uncles, parents, grandparents who had been, as the Savationists say, Promoted to Glory.  Instruments they had played and kept in their memory, of them and the music they made.  It was suggested I get into contact with the local Sally Ann...which I did....who in turn suggested that I write to the "house organs" of the various U.S. SA regions.  So I did, and of the 5 of them, three were kind enough to allow me to run a want ad in their back pages.

It all but rained concertinas.  And I met such wonderful people, your officer corps....all of them were kind, engaging, helpful souls.  I grew up in the American South, where Christianity is fervently professed...but less often witnessed in the true spirit of Christ in daily life.  The talk, not so much the walk.

But my contact with Salvationists in this search for concertinas was humbling: to a man and woman, they responded kindly with an open heart.  They all but gave the tinas away, happy in knowing that they would make music again.  Most of them needed a lot of work (attics are not kind to tinas), but they were quality instruments that were restorable.  I sent them to a shop that specialized in their repair, where they were restored to like new condition. I would get each one back....and then if it wasn't better than what I had, I sent it back to the shop and they sold it.

In a time when concertinas were scarce as hen's teeth, this was a wonder that made everyone happy.

And all of them came with stories.  My daily player, a lovely quick SWheatstone model 6, was passed to me by a Salvationist woman in her 80s (I was maybe 45 then, now I'm 75) who as a little girl had sat on the case to see out the window when they drove to an SA picnic where one of her family played it......

In a world where righteousness is so often its opposite, self-righteousness, I have had my eyes and heart opened by the spirit of Christ in the Salvation Army.  Their witness blesses us all.


Back to my home page


All of my web page content, audio, videeo, photographs and images  included, are copyrighted material! You may NOT copy or use ANY web content without my express permission.